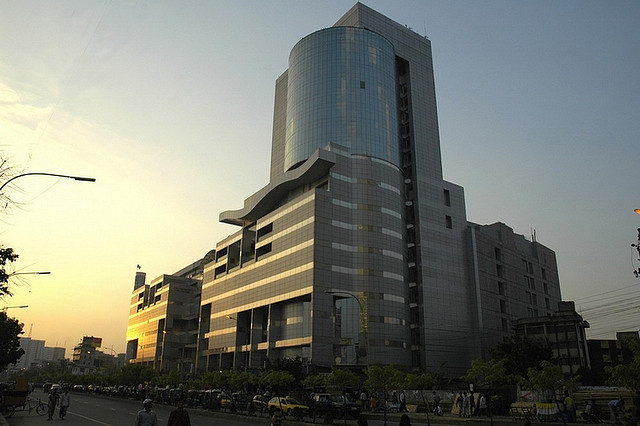 Bashundhara City, located in Dhaka, Bangladesh, is the largest shopping mall in South Asia. It was opened to public on 6 August 2004. It is located at Panthapath, near Karwan Bazar, in Dhaka city.
Bashundhara City is 21 stories tall, of which 8 are used for the mall and remaining floors are used as the corporate headquarters of the Bashundhara Group. It was constructed by Bashundhara Group.
The mall has space for 2,500 retail stores and cafeterias and also possesses a large underground gymnasium and top floor food court along with an indoor theme park.
The mall features a multiplex styled movie theater with digital sound system and multiple screens which feature both local and foreign films. Each of the three parts of the theater can accommodate 262 people. The Bashundhara City building also has rooftop gardens and is a modern symbol of the emerging city of Dhaka.
Visitors to the mall are transported from floor to floor via escalators and capsule elevators, all imported from Switzerland. The roof of the mall area features a remarkable massive stained-glass dome, built with glass imported from Saudi Arabia.
The mall is fully air-conditioned, and to circumvent troubles caused by regular electrical load shedding that typically affects Dhaka, the mall is powered its own 15-megawatt sub-station.

We have found 1 videos for Bashundhara City from youtube.com.

The foolish man seeks happiness in the distance, the wise grows it under his feet.