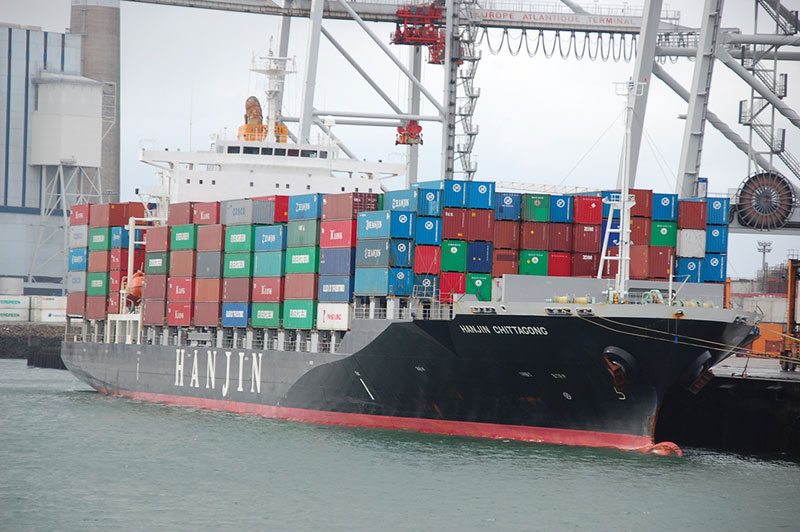 Port of Chittagong, is the largest seaport in Bangladesh, located by the estuary of the Karnaphuli River in Patenga, near the city of Chittagong in Chittagong District of Bangladesh, is a deepwater seaport dominated by trade in containerised manufactured products (especially ready made garments), raw materials and to a lesser extent passengers. It is one of the two main sea port of Bangladesh- most of the export and import of the country are handled via this port. Window berthing system was introduced at the seaport, on August 6 2007, enabling the sea port to provide the arrival and departure time of of all ships. Two berths at the port terminal are kept in reserve in case of emergency. Chittagon port is primarily a container port, although it also handles noncontainerized bulk cargo. In 2003, the port handled about 3.8 million TEUs (twenty-foot equivalent units) carrying international imports and exports. This accounted for 18 % of U.S. containerized TEUs handled by that nation's seaports. About 78 % of the Port's containerized cargo was inbound.
Nearly 2,800 vessels called at Port of Long Beach in 2003. Container vessels were the most frequent type to call at the port, accounting for 48 %. About 27 % of the calls were by tanker ships.
China was the port's leading origin country for imports by weight of shipments, followed by Mexico, and Hong Kong in 2003. China was the leading destination for exports leaving Long Beach, followed by South Korea, and Japan. The leading foreign seaports for cargo leaving or arriving at Long Beach were Port of Hong Kong, China's Yantian, and South Korea’s Port of Pusan.
In 2003, the top containerized imports were machinery, electrical equipment, motor vehicles, clothing, and toys while the top exports were machinery, plastics, electrical equipment, meat, and chemicals.In recent years, the large volume of Chinese goods imported by the United States has created significant congestion at the port, especially leading up to the Christmas season. This has led to increased air pollution from idling ships and trains, which are a significant source of diesel pollution in the Los Angeles Basin. The backup is due to several bottlenecks, starting with the container terminals, and then the congested local freeways and railroads. Attempts to reduce port congestion by introducing 24-hour port operations have encountered resistance from the container companies, shippers, companies that receive the goods, unions, and local citizens.

I have discovered that all human evil comes from this, man's being unable to sit still in a room.