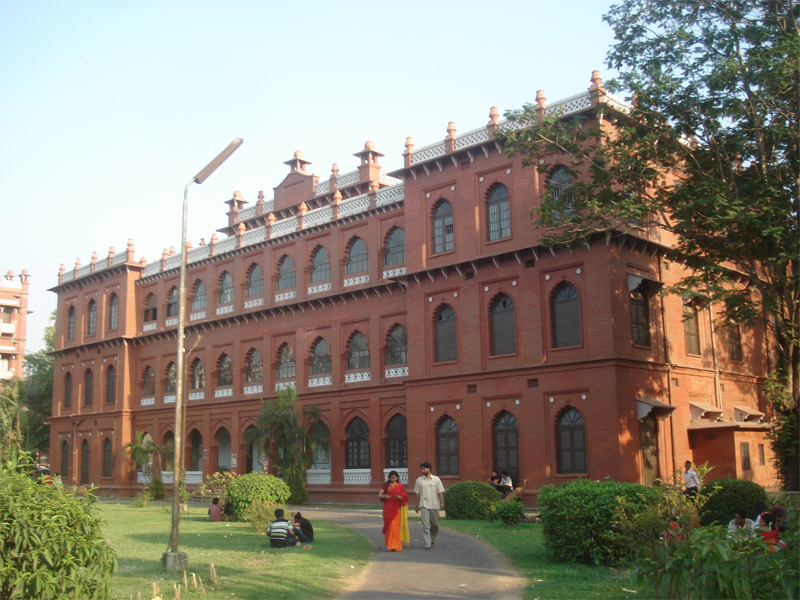 Curzon Hall meant to be a town hall, was named after lord curzon, the Viceroy of India, who laid its foundation in 1904. A year later Bengal was partitioned and Dhaka became the capital of the newly created province of East Bengal and Assam. Following the annulment of partition in 1911 it was used as a premise of Dhaka College, and after the establishment of Dhaka University in 1921, became part of the university's science section and continues as such. Laid out in a spacious and carefully maintained garden, this double storeyed brick building has a large central hall, lateral wings on the east and west with several rooms, and a continuous verandah on all sides.
One of the best examples of Dhaka's architecture, it is a happy blend of European and Mughal elements, particularly noticeable in the projecting facade in the north which has both horse-shoe and cusped arches. The style combined traditional art with modern technology and functions and favoured Mughal forms such as arches and domes, believed to have entered the Islamic world from the west. It marks the casting aside of veiled power after the sepoy revolt of 1857, and India's passing directly under the British Crown, seeking legitimacy by linkage to the Mughals. The red colour substituting for red sandstone, and the ornate brackets, deep eaves, and domed terrace pavilions (chhatris), specially of the middle section are strikingly reminiscent of the small but well-known Diwan-i-Khas in the palace fortress of Fatehpur Sikri, Emperor akbar's capital between 1570 and 1585. Not only were both cities new capitals, but the deliberate choice of the Fatehpur Sikri style may be explained by the fact that the British favoured Akbar as the wisest and most tolerant of all the Mughals, feeding into the ideal of their own role in India.
The Curzon Hall has attained a great significance in the history of the language movement. It was here, in 1948, the students of Dhaka University uttered their first refusal to accept mohammed ali jinnah's declaration that Urdu alone would be the state language of the then Pakistan.

Life is divided into the horrible and the miserable