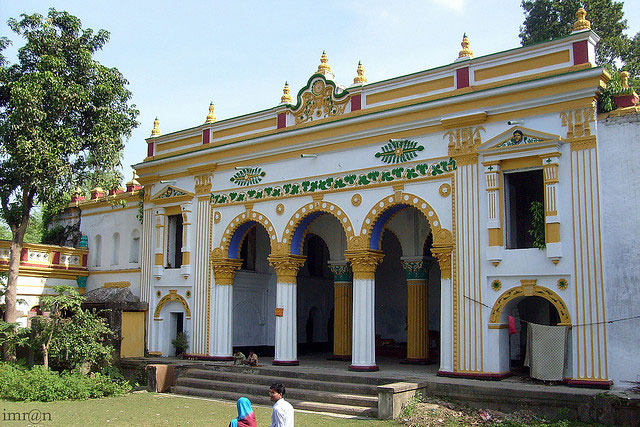 Dinajpur Rajbari now in ruins, is situated on the north-east outskirts of the present town. Originally enclosed within defensive moats and high rampart, the derelict remains of the Dinajpur Rajbari, can now be approached through a tall arched gate facing west. Inside the palace precinct near the gateway on left is a painted Krisna temple and on right, some ruined outhouses and another inner gateway that provides access to an inner square court. Facing the courtyard on the east is a flat-roofed temple, the front verandah of which is supported on four semi-Corinthian pillars and another set of columns carry the roof of the main hall.
Pitiable wreckage of the palace is now a collection of abandoned brick- buildings in an advanced stage of disintegration. The palace remains consist mainly of three groups of Mahals (blocks), known as Aina Mahal, Rani Mahal and Thakurbadi Mahal, besides other accessory buildings, erected by various Rajas and Zamindars at different times. A number of temples, rest houses, charitable dispensaries, tanks and sundry residential quarters of employees and retainers were also built within the palace area. All these building occupy an area of 16.41 acres of land including two large tanks on the east and south, the moat, garden, a defunct zoo, a tennis court, Katchary and the Kumar House. The main mahals and the enclosing moats seem to have been constructed by Maharaja Prannath and his adopted son Ramnath in the 18th century. It was built in the strange mixture of European, Muslim and Hindu styles and did not depict a very good taste. Two parallel moats called Ramdanga, which surrounded the palace on all sides, were probably dug by Ramnath after the invasion of his palace by sayed ahmed khan, the Faujdar of Rangpur under alivardi khan.
The imposing two-storeyed main palace facing east, now largely pulled down, was known as the Aina Mahal (Mirror Place) though now no trace of any glass mosaic remains on any part of the survived edifice or in its crumbling rubble. The eastern facade, about 45.72m wide has a 3.05m wide verandah above, projected prominently.
On either side of the balcony a broad spiral staircase leads up to the upper storey. The front projection of the upper floor has a series of elegant Ionic columns in pairs with round shafts. The parapet on top is plain except a short rectangular panel, rising slightly above the parapet level containing within an insignia of royalty depicting two confronting elephants holding a crown in relief. The floors of this block were flagged with black and white marble stones while ceiling gilded with stucco patterns noticeable especially in its Durbar Hall, Jalsa Hall, Toshakhana and the library.
Behind the main palace block on the west are the two-storeyed square block of Rani Mahal and the Thakurbadi Mahal. These once beautiful edifices, have now been thoroughly stripped off their costly relies, fitting fixtures and other belongings.

We have found 1 videos for Dinajpur Rajbari from youtube.com.

Light be the earth upon you, lightly rest.