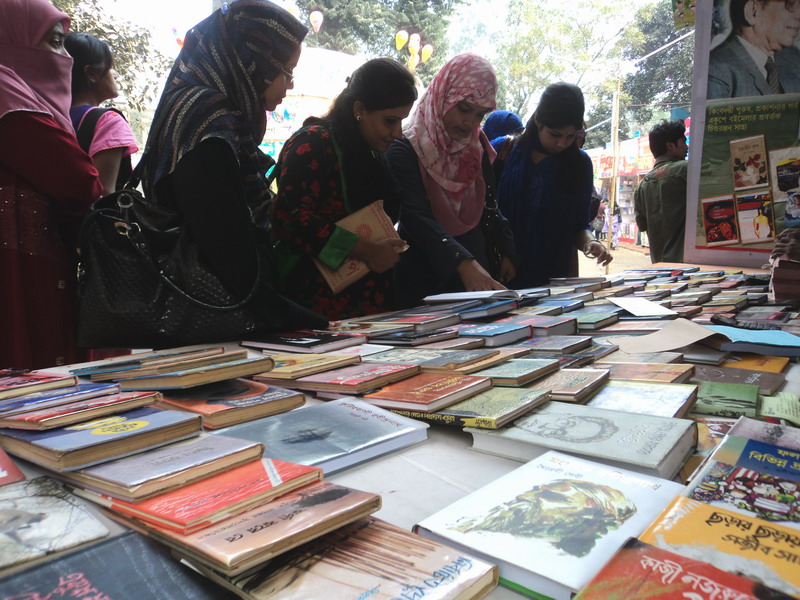 The Ekushey Book Fair or Omor Ekushey Grontho Mela (Bengali: Omor Ekushe Grontho Mela "Book Fair of the Immortal 21st") is the main book fair of Bangladesh. It occurs every February, and is dedicated to the protestors who died on 21st February of 1952 in a demonstration calling for the establishment of the Bengali language as the state language of former united Pakistan.
Muktodhara Publishing house started a little sell in front of Bangla Academy in the 21st February, the Shaheed Day, later International Mother Language Day. Later, other book publishers joined there unofficially. Gradually it became official and the most popular book fair of Bangladesh.
Usually, the fair continues from 1st February to 28th. It is limited only in Bangla Academy's boundary. The Ministry of Culture is in control of the fair while the Academy helps. Usually the Prime Minister starts the fair. Around 400 publishing house takes part. Only the Bangladeshi booksellers can join who have at least 25 books of their own. There is Nazrul Manch, a corner dedicated to poet Kazi Nazrul Islam; a fixed place for month-long cultural meetings, a Lekhok Kunjo, place for writers and a media center. Now a days, it became harder to accommodate.

Resource for Ekushey Book Fair or Omor Ekushey Grontho Mela: Tour Guide | Hotel / Motel | Restaurant | Transport
50% books are sold during this time, only in this month. 90% books published. It is the cultural reunion of Bangladesh where nearly every writing-related person comes. For Cheap rate, 20% discount (now 30%), readers rush there.
,

We have found 1 videos for Ekushey Book Fair or Omor Ekushey Grontho Mela from youtube.com.

What's the use of worrying? It never was worthwhile.