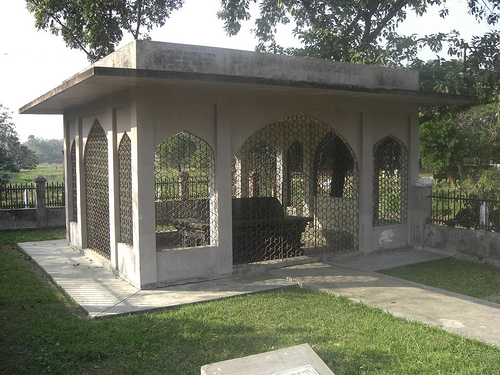 Ghiyasuddin Azam Shah's Tomb the earliest existing structure of the Sultanate period in Bangladesh. It is a stone sarcophagi-tomb at Shahchilapur of sonargaon and is ascribed to Sultan ghiyasuddin azam shah, the third Iliyas Shahi ruler of Bengal. The tomb stands on the edge of a dried up pond, locally known as Magh Dighi, located about a hundred feet east of the Panch Pir Dargah, and on the southern outskirts of the old city.
The fine stone sarcophagus consists of a single block of black basalt forming a keeled top that is placed on a table of the same material. According to James wise, 'this was formerly surrounded by an enclosure of stone pillars which supported a canopy on the top'. It was embellished with chiselled work on stone. Today, the decoration is seen only on its eastern face. The cornice of the table has a line of billet decoration below a beaded ornament - a pattern very similar to that of the stone carvings of the 'Badshah Ka Takht' in the adina mosque. Below this line there are a series of panels, each decorated with trefoil-arched niche and a hanging motif within. This looks like a shika design hanging from the roof of an arched window and had been described by Dani as a motif of a lamp. This motif bears similarity with that of the Adina mosque in pandua and the goaldi mosque in Sonargaon. The only difference is that here they are held in double chains, whereas in the mihrab of the Adina Mosque it is suspended from a single chain. Formerly, at the head of the tomb stood a sandstone pillar, which carried a lamp (chiragdan). The style of the design and carvings make this tomb very close in time to the Adina mosque.
There is no inscription on the tomb, but this appears to be the earliest existing monument to copy the decorative designs of the Adina Mosque. Local legend ascribes it to Sultan Ghiyasuddin Azam Shah who died in 814AH/ 1411 AD. Thus the monument may be placed in the early 15th century AD, when Ghiyasuddin was the sultan of Bengal. Architecturally, the monument belongs to the period of this sultan as it follows the decorative style of the Adina mosque built by his father sikandar shah.
There is a controversy among scholars about the identity of the person buried in this tomb. Dani, on the basis of local legends, ascribed it to Ghiyasuddin Azam Shah. But buchanan records that he was buried in the eklakhi mausoleum at Hazrat Pandua. Literary evidence testify that Sultan Sikandar Shah died in course of a fight with his son Ghiyasuddin near Sunnagar, a village about 20 miles west of Sonargaon. The place might be near modern Songar and Katasur within mauza Jafrabad of old Dhaka district.
Ghiyasuddin, though overwhelmed by grief at this tragic event, left his father's funeral at the hands of his courtiers and rushed to Pandua to establish his succession to the throne. It appears more likely, therefore, that Sikandar Shah was buried hurriedly at Sonargaon. The tomb of Sikandar Shah, usually identified with the chamber at the back of the Adina Mosque, is unlike a tomb. Once it was a nine-domed chamber, though the domes no longer exist now. There is no stone grave within this chamber. In all likelihood, it was a resting place and a place from which the sultan's horse could reach up to the second storey of the mosque through a postern gate. This gave an access to the Badshah Ka Takhat, a protected enclosure of the mosque for the sultan. It was a feature identical to the ones at chhota sona mosque and the darasbari mosque. Buchanan Hamilton's record lends support to this theory. Though ghulam husain salim has mentioned that the tomb of Jalaluddin Muhammad Shah was at Pandua, he in fact, does not specifically link it to the Eklakhi tomb. On the contrary, he has stated that there was a large tower over the mausoleum at Pandua where the family members of Jalaluddin Muhammad Shah lie buried. It is not, however, clear what he exactly meant by a 'large tower'. Sayeed Ilahi Bakhsh identified the large grave inside the Eklakhi mausoleum with that of Jalaluddin and the smallest one with that of his son, while the grave located between the two was identified by him to be that of Jalaluddin's wife.
Among the historians, Buchanan alone suggests that the three graves belong to Ghiyasuddin, Jainuddin, and Wazuhuddin. However, since Ghiyasuddin died at Pandua and Sikandar Shah at Sonargaon, it is more logical to believe that Ghiyasuddin was buried at Pandua and Sikandar Shah at Sonargaon. Sufice it to say that Ghiyasuddin Azam Shah was a great builder and a patron of indigenous craftsmen - both Hindus and Muslims - and that the Eklakhi Mausoleum is a synthesis of the two art traditions. The prevailing terracotta art of Bengal in which the Hindus excelled was liberally used in this monument. It is indeed a museum of terracotta art where as many as 13 patterns are found embellishing its wall surface. Ghiyasuddin spent his early life at Sonargaon and later at Gaur. In all likelihood he built the present tomb at Sonargaon for his father and erected the famous Eklakhi mausoleum at Pandua for his own internment.