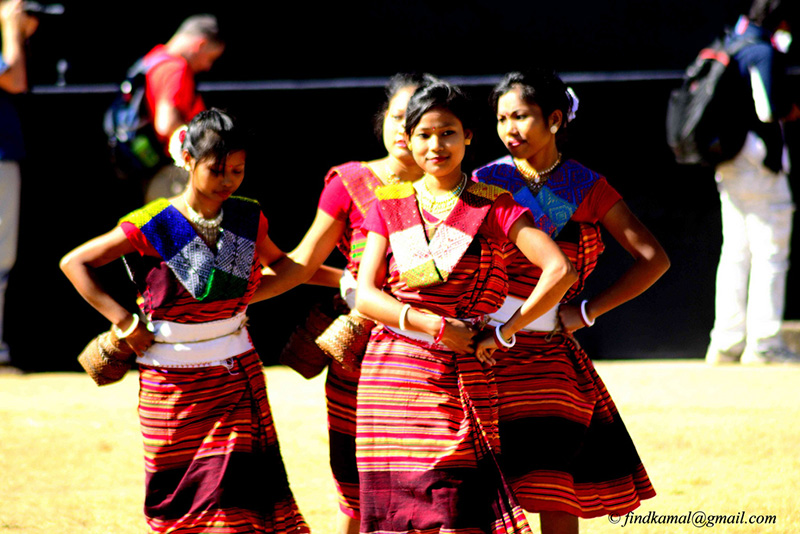 Hajong, The an ethnic group living in the hilly parts of mymensingh district. Some of them live in the sherpur, sylhet and netrokona regions. Their main settlements are in sreebardi, haluaghat, nalitabari, Susong durgapur, kalmakanda and Birishiri areas. In terms of ethnicity, they are descendents of the Kachhari people of the Mongoloid race. Several hundred years ago they came to the region adjacent to the Garo hills and started living there. Hajong people are divided into two main classes - Paramarthi and Byayabchhadi.
Like many other aborigines, Hajongs are basically a farming community. At one time they were accustomed to jhum farming, but now they follow plough farming. Side by side with rice and other crops they grow cotton and make fabrics at home. In addition to these activities, people belonging to the Hajong community collect wood from jungles and do some other kinds of work.
In terms of religious belief Hajongs are close to Hindus. Hajongs worship Durga and other Hindu gods and goddesses. But shiva is their chief deity. They observe a number of bratas (vows) including the Kartik brata performed in the month of Kartik (October-November). Girls and women dance and sing in brata ceremonies. Hajongs also worship the brahmaputra river. Like Hindu brahmans, Hajongs wear paita (the holy thread) on their bodies. Hajongs are believers in reincarnation too.
Hajong society is patriarchal. After the death of the father sons inherit his property. Daughters however, are given dowry and ornaments at the time of their marriage. Young men and women marry with their parents' consent. A Hajong man can marry a woman of his own clan as well as of a different clan. After marriage, women put on sindur (vermilion) mark on their sithi (parting of the hair on the middle of the head). Child marriage is not allowed. Premarital sex is strictly prohibited. Hajongs generally abide by the rules and principles of marital purity. A husband cannot have more than one wife. Divorce is not uncommon and widows can remarry. Rules of divorce followed by Hajongs are in many respects similar to those found among santals and murongs.
Rice is the staple food of Hajongs. Fruits, vegetables, mutton, pork, ducks and chicken are other major items of their diet. Hajong men wear dhuti and women wear a piece of cloth to cover the upper part of the body and a separate piece for the waist downward. They usually wear homemade clothes.
Hajongs lead simple lives like garos. Most families live in thatched houses. Relatively better off families have tin-shed or brick-built houses. Houses are neat and clean reflecting the neatness of their life-style. Like other ethnic groups, Hajongs build and maintain community houses for social needs as well as for other purposes.
Hajongs have their own language, but do not have an alphabet. Their spoken language is a mixture of local dialects. Speaking in colloquial Bangla is a common practice among them. The Hajong language was originally a member of the Tibeto-Burmese group of languages, but later got mixed with Assamese and Bangla. Modern education has not yet spread in Hajong society.
In their life-style, Hajong people maintain, to a large extent, their traditional ethos of simplicity, honesty, and hospitality as well as other common plebeian characteristics. False play and deceit are rare in this society. Like mundas, Santals and Garos, Hajong people have protested vehemently against injustice, oppression, exploitation and persecution in the past and have histories of rebellion against feudal and imperialist forces. They took part in historic movements like the Hatikheda movement, the tonk movement, agitations against zamindars, and the tebhaga movement. Hajongs cremate dead bodies. Usually, after 10 or 30 days of death the shraddha (obsequies) ceremony is performed.