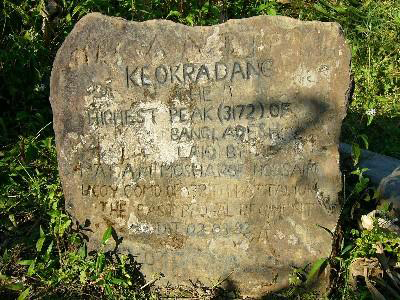 Keokradong (or Keokradang) is the third highest mountain peak located in South-Eastern Bangladesh. It was long claimed as the highest peak there, a mistaken infomration that still features in respected sources including some Bangladesh textbooks as well as the CIA World Factbook website. On the top of Keokradong there is a small shelter and a signboard put up by the Bangladeshi military proclaiming the altitude to be 3172 feet. Garmin GPS recorded 974 metres (3196 feet) at this location, a measurement consistent with Russian topographic mapping and SRTM data. It is at 21°57?00?N, 92°30?53?E. USGS and Russian mapping dispute the claim that this is the location correctly named Keokradong; they show Keokradong at an 883m summit further north.

We hold in our hands, the most precious gift of all: Freedom. The freedom to express our art. Our love. The freedom to be who we want to be. We are not going to give that freedom away and no one shall take it from us!