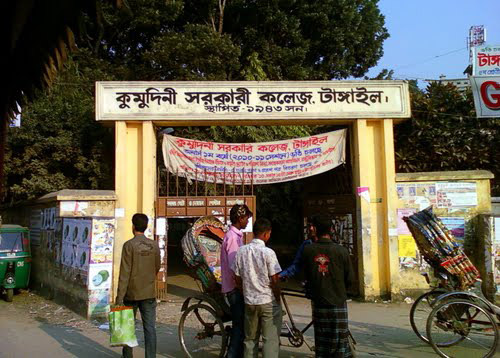 Kumudini College was established in 1943 by philanthropist Rai Bahadur ranadaprasad saha. The college was established to promote women's education. He named the college after the name of his mother. The college started in a small house of one Premaditya Ghosh of Paradise Para of tangail town. At the beginning, there were only eight students. After some time, the college was shifted to a warehouse owned by Jatindranath Roychowdhury. Kumudini College was the third girls' college of East Bengal after eden girls' college of Dhaka (estd. 1926) and Sylhet Girls' College (estd. 1939). Kumudini's first principal was Srimati Jotirmoy Ganguli.
Ranada Prasad Saha bought some land for the college in the Biswasbetka area of Tangail town and in 1945 shifted the college to a new place, which has become its permanent site. The college campus now covers about 14 acres of land. The college received funding support from the Kumudini Welfare Trust until 1 January 1979, when it was nationalised. At present, it is a postgraduate college. It offers Higher Secondary and Degree (pass) programmes. It also has Honours and Masters Programmes in 16 subjects.
In 2000, the college had 42 teachers (23 women) and 1,402 students. It has residential facilities for students and its hostels can accommodate 450 girls. The college has a rich library. In addition to contributing to promotion of women's education, the college promotes participation of its students in cultural, literary and sports programmes. The college earned reputation for its Girl Guide and the Girl Scout Troop.