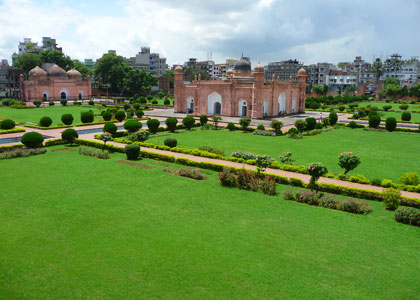 The fort of Aurangabad, popularly known as the Lalbagh Fort, was built in 1678 AD by the then Viceroy of Bengal Prince Mohammad Azam, son of the Mughal Emperor Aurangazeb. The fort has a three storied structure with slender minarets at the South Gate. It has many hidden passages and a mosque of massive structure. Outstanding among the monuments of the Lalbagh Fort are the Tomb of Pari Bibi (Fairy lady) and Audience room and Hummam Khana (bathing place) of Nawab Shaista Khan, now housing a museum. The fort was the scene of bloody battle during the first war of independence (1857) when 260 spays stationed here backed by the people revolted against British forces. It is one of the great historical places of Mughal era. A small museum is there in this fort where you will find the clothes and weapons of the Mughols. The capital city Dhaka predominantly was a city of the Mughals. In hundred years of their vigorous rule successive Governors and princely Viceroys who ruled the province, adorned it with many noble monuments in the shape of magnificent places, mosques, tombs, fortifications and 'Katras' often surrounded with beautifully laid out gardens and pavilions. Among these, few have survived the ravages of time, aggressive tropical climate of the land and vandal hands of man. But the finest specimen of this period is the Aurangabad Fort [commonly known as Lalbagh Fort], which indeed represents the unfulfilled dream of a Mughal Prince. It occupies the southwestern part of the old city, overlooking the Buriganga on whose northern bank it stands as a silent sentinel of the old city. Rectangular in plan, it encloses an area of 1082' by 800' and in addition to its graceful lofty gateways on southeast and northeast corners and a subsidiary small unpretentious gateway on north, it also contains within its fortified perimeter a number of splendid monuments, surrounded by attractive garden. These are a small 3-domed mosque, the mausoleum of Bibi Pari the reputed daughter of Nawab Shaista Khan and the Hammam and Audience Hall of the Governor. The main purpose of this fort was to provide a defensive enclosure of the palatial edifices of the interior and as such was a type of palace-fortress rather than a siege fort.

Resource for Lalbagh Fort: Tour Guide | Hotel / Motel | Restaurant | Transport
Lalbagh fort is in the old town of Dhaka at Lalbagh. It is open 10 am-5 pm Sunday to Friday & Saturday is closed.
Dhaka, Dhaka

We have found 1 videos for Lalbagh Fort from youtube.com.

There is no abstract art. You must always start with something. Afterward you can remove all traces of reality.