National Museum of Science and Technology 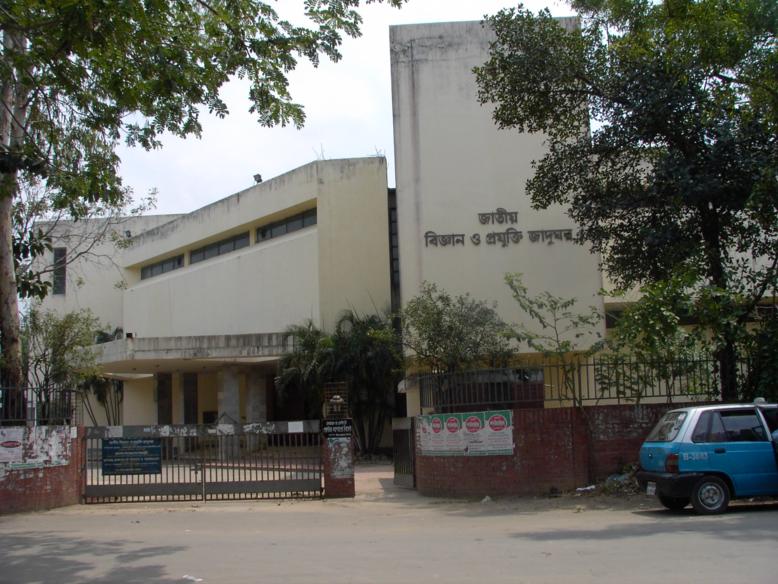 Overview of National Museum of Science and Technology

National Museum of Science and Technology established at dhaka in 1966 by a resolution of the ministry of education of the government of Pakistan dated 26 April 1965. It started functioning in September 1966 at the Dhaka Public Library building and the curator of Dhaka Museum was its first officer in charge. It was shifted to Chamelibag in April 1970 and to Road No. 1, dhanmondi in May 1971. It was further shifted to Road No. 6, Dhanmondi in 1979 and next year, to a place in front of the Kakrail Mosque. The government allotted 5 acres of land at Agargaon, Sher-e-Bangla Nagar for construction of a building for the museum, which finally got its own building in 1981. It was given the status of national museum in 1972. It now operates as an autonomous body under the ministry of science and technology. It has a board of governors which comprises eminent persons drawn up from government and the scientific, technical, educational and museum fields with the secretary, ministry of science and technology as chairman.
The museum preserves natural exhibits and the innovative work of the local scientists and encourages the young scientists to carry out innovative work, displays exhibits showing the history of scientific and technological advancement of human society, and creates a scientifically educated citizenry. The activities of the museum are organised on the basis of needs, interests and levels of the target group people, which include students, out-of-school children, youth and adults, illiterate people, working people, media men, amateur scientists, and persons who want to broaden their horizon of knowledge. The museum provides science education to visitors through galleries with static and working exhibits, models, charts, diagrams, animated posters etc. It has three divisions, one each for technology, physical science and biological science. The exhibits provide information about experiments and inventions in the fields of electricity, heat, light, magnetism, sound, communication, and motion, force and energy. They also include different kinds of rocks and minerals, pictorial records of man's journey to space, a diorama of dinosaurs and a pictorial representation of various animals living in different depths of sea.
The museum has special arrangements for exhibiting locally manufactured products from jute, wood, wool, water hyacinth and different herbs and shrubs. Demonstration lectures are delivered to students and teachers of different schools and colleges on suitable topics covered by the secondary or higher secondary science syllabi. The museum regularly organises lectures or film shows on popular science topics, projects of science clubs and the scientists. One of the main functions of the museum is to encourage the science club activities in the country. It provides expert guidance and workshop facilities to about 500 science clubs spread all over the country. There are regular programmes for observing celestial bodies, lunar eclipse, solar spots and eclipse through reflecting telescope. A mini-planetarium installed at the museum can accommodate 20 visitors at a time.
The museum has a library with books and journals on different subjects for the amateur scientists. It regularly publishes scientific booklets and magazines. A popular publication is the quarterly juvenile science magazine Nabin Biggani. The museum also organises various national and international workshops and seminars on science at different occasions. It plays a vital role in arranging National Science Week sponsored by the Ministry of Science & Technology. During the week, innovators, both individuals and groups of them, from different schools, colleges and science clubs display selected exhibits of models and projects. The activities of the science week are organised in two stages - first at the district level and then at the central level. Only the first prize winners of the competitions at the district level activities participate in the central level. Some exhibits and projects displayed in the science week are wood made cyclostyle machine, indigenously prepared grease, wind mill, amphibian cycle, spray machine, economic cooker, bio-gas, solar heater, solar cell, solar pump, paper condenser, hand driven irrigation pump, bamboo made thermoflask, reflecting telescope, microscope, stuffed and mounted birds, skeletons and embryos, and models of boats, airplanes, oil refineries, steel mills, paper mills, and projectors.

I say that good painters imitated nature; but that bad ones vomited it.