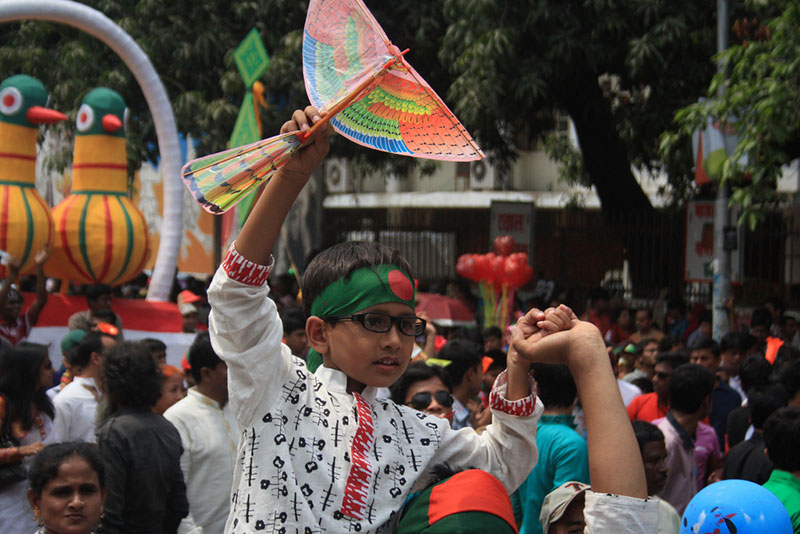 Bengali calendar was introduced through an ordinance promulgated by Akbar the Great, the renowned Moghul emperor, 415 years ago. The calendar was originally known as Tarikh-e-Elahi and was introduced on the 10th or the 11th of March in the 29th year of Akbar's reign i.e. in 1585 A. D. It, however, dates from the day of Akbar's ascension to the throne of Delhi and commemorates his coronation as the Emperor of India in 1556. The Second Battle of Panipath and the Coronation of Akbar as the Emperor of India are indeed great events in the annals of history. The Moguls had nearly lost the throne of Delhi for good. Akbar was not even an adult when the life of Humayun was suddenly cut short on the stairs of his own library. What is more, the mighty and competent Hindu general Himu, the Commander-in-Chief of Islam Shah, had conquered both Delhi and Agra and declared himself Raj Chakravarty. It seemed that the days of the Great Moghuls were numbered and they would be driven out from the sub-continent forever. But the brave and indomitable Akbar rose to the occasion and faced the enemy with courage and conviction. With the able guidance and help of Bairam Khan, Akbar created history by defeating the invincible army of Himu at the Second Battle of Panipat on the 5th of November 1556. This was indeed a momentous occasion in the history of the Indian subcontinent. It not only re- established the Moghul dynasty on the Indian soil but also ensured its continuation for many a year to come. As a result, the Moghuls ruled over this sub-continent with glory and greatness for three hundred years more. It was the greatest achievement in Akbar's checkered life. It was to glorify and immortalize the historic event and also to facilitate the collection of revenue during harvest in a more systematic way that Akbar the Great introduced Tarikh-e-Elahi from the 10th of Rabiul Awal in 963 A.H. It may be mentioned in this connection that from the very beginning of his reign, Akbar felt the need of introducing a uniform scientific, workable and acceptable system of calculating days and months through a reformed calendar. With this end in view, he commissioned Amir Fathullah Shirazi, a distinguished scientist and the most famous astronomer of the day, to make a recommendation for the reformed calendar. Abul Fazal, the renowned scholar and a minister of Akbar the Great, in his scholarly work Akbar Namah, gives details of the events leading to the new era under the Royal Forman of Akbar. Abul Fazal explains that the use of the Hijrah Era was unfair to the peasantry, because 31 lunar years were equal to 30 solar years and the revenue was collected on the basis of lunar years whereas the harvest depended on the solar ones.

The months of the new Bengali Era (or Tarikh-e-Elahi) were initially known as Karwadin, Ardi, 'Vihisu, Khordad, Teer, Amardad, Shahriar, Aban, Azur, Dai, Baham and Iskander Miz. Nobody knows for sure how and when we started naming the months as Baishakh, Jaishtha, etc. It is presumed that these months, based on the names of the stars, were derived from the Shakabda which was introduced in 78 A.D. to commemorate the reign of the Shaka dynasty in this subcontinent.

The star-based names of the months were derived as follows:

Akbar also introduced the system of celebrating Nababarsha or Pahela Baishakh . After introducing Tarikh-e-Elahi, he abolished the hitherto practiced Muslim festivals and replaced them by fourteen new festivals, one of which was Nawroze or the celebration of the New Year's Day. It was the celebration of Nawroze, which enabled Prince Selim (later emperor Jehangir) to meet and fall in love with Nurjahan. It was again in one such Nawroze festival that the Prince Khurram (known as the Emperor Shahjahan in history) first came across Mumtaz Mahal, whom he immortalized through the great Taj Mahal. Had there been no festival, there probably would have been no Nurjahan, and no Taj Mahal.

Hopefully, many a young heart would be touched by the spirit of this New Years day. New epic of affection will be composed; perhaps there will be a grander shrine of love.

Celebrations of Pahela Baishakh started from Akbar's reign. It was customary to clear up all dues on the last day of Chaitra. On the next day, or the first day of the new year, landlords would entertain their tenants with sweets. On this occasion there used to be fairs and other festivities. In due course the occasion became part of domestic and social life, and turned into a day of merriment.

The main event of the day was to open a halkhata or new book of accounts. This was wholly a financial affair. In villages, towns and cities, traders and businessmen closed their old account books and opened new ones. They used to invite their customers to share sweets and renew their business relationship with them. This tradition is still practised, especially by jewellers.

New year's festivities are closely linked with rural life in Bengal. Usually on the day everything is scrubbed and cleaned. People bathe early in the morning and dress in fine clothes and then go to visit relatives, friends and neighbours. Special foods are prepared to entertain guests. Baishakhi fairs are arranged in many parts of the country. Various agricultural products, traditional handicrafts, toys, cosmetics as well as various kinds of food and sweets. are sold at these fairs. The fairs also provide entertainment, with singers and dancers staging jatra, pala gan, kavigan, jarigan, gambhira gan, gazir gan and alkap gan. They present folk songs as well as baul, marfati, murshidi and bhatiali songs. Narrative plays like laily-majnu, yusuf-zulekha and Radha-Krishna are staged. Among other attractions of these fairs are puppet shows and merry-go-rounds.

Many old festivals connected with new year's day have disappeared, while new festivals have been added. With the abolition of the zamindari system, the punya connected with the closing of land revenue accounts has disappeared. Kite flying in dhaka and bull racing in munshiganj used to be very colourful events. Other popular village games and sports were horse races, bullfights, cockfights, flying pigeons, boat racing. Some festivals, however, continue to be observed, for example, bali or wrestling in Chittagong and gambhira in Rajshahi.

Observance of Pahela Baishakh has become popular in the cities. Early in the morning people gather under a big tree or on the bank of a lake to witness the sunrise. Artistes present songs to welcome the new year. People from all walks of life wear traditional Bengali dresses: young women wear white sarees with red borders and adorn themselves with bangles, flowers, and tips. Men wear white pyjamas or dhoti and kurta. Many townspeople, start the day with the traditional breakfast of panta bhat (cooked rice soaked with water), green chillies, onion, and fried hilsa fish.

The most colourful new year's day festival takes place in Dhaka. Large numbers of people gather early in the morning under the banyan tree at Ramna Park where chhayanat artistes open the day with Tagore's famous song, Eso he Baishakh eso eso (Come O Baishakh, come), welcoming Baishakh. A similar ceremony welcoming the new year is also held at the Institute of Fine Arts, university of dhaka. Students and teachers of the institute take out a colourful procession and parade round the campus. Social and cultural organisations celebrate the day with cultural programmes. Newspapers bring out special supplements. There are also special programmes on radio and television.

We have found 2 videos for Pahela Baishakh from youtube.com.